Blow-Up is Michalengelo Antonioni’s first English film and was released at the end of 1966. The plot is quickly summarized: in 1960s London, a professional photographer (Thomas) tries to escape his day-to-day by taking pictures in a nearby park. There he encounters a couple and takes their photos from a distance. He is confronted by a woman who demands he surrender his roll of film, and she persists in following him to his studio to try to get it back. Later he develops the pictures and notices a little detail in one of them - upon magnifying it (thus given name to the title), he discovers in the grainy detail of his photographs a potential murder plot.

He returns to the park and finds a dead body, hiding under the trees. Upon returning to his studio he finds all of his film and photographs of the scene have been taken. Later, returning to the park, he finds no evidence of the dead body. Was there ever a murder? The End.

For me Blow-Up is more relevant today than Antonioni’s other works, great though they are. His “alienation triology” (L’Avventura, La Notte and L’Eclisse) are great movies that touch on alienation in the modern world, but the characters in those movies always struck me as abstract and were just a bit harder to relate to.

In contrast it’s always been easy for me to identify with Thomas, and his emotional arc gets reinforced by the movie in ways that Antonioni’s other movies are less interested in. At the start of the movie, he is brash and overconfident. When he first “discovers” the murder plot he initially thinks he’s saved someone’s life (he’s basically a hero!). Then he takes another look at the photographs and discovers there might be a dead body body there (it’s so grainy!). He goes to the park again but it seems completely unreal, the dead body hasn’t moved in 12 hours. It seems fake. He loses his photos and then can’t even reconstruct a plausible story of what did happen. At the end of the movie in one of my favorite movie endings of all time, he watches the mimes playing tennis with an invisible ball … and then slowly begin to hear through his ear, the sounds of the invisible ball hitting the court. His feeling of objective truth is shattered, the camera pans out, and he vanishes into into landscape.

Outside its main arc, the themes of Blow-Up remain relevant in today’s world where everyone has a camera in their pocket and presents themselves to the world through a set of carefully curated pictures. Thomas’s lens of the world is one of intense privilege - he forces other people to adapt to his world as he encounters them. For his professional work, he forces the women in front of the camera to supplicate themselves to him, but it’s clear that they’re more complicated than the version of them that ends up captured by the film. In attempting to get back the park photos, Vanessa Redgrave tries to seduce him, presented as a “well, maybe this will work?” attempt by a goal-driven woman. It’s hard to feel like Thomas really knows anyone that he interacts with. Other people are just things be forced into perspective by his lens on the world. 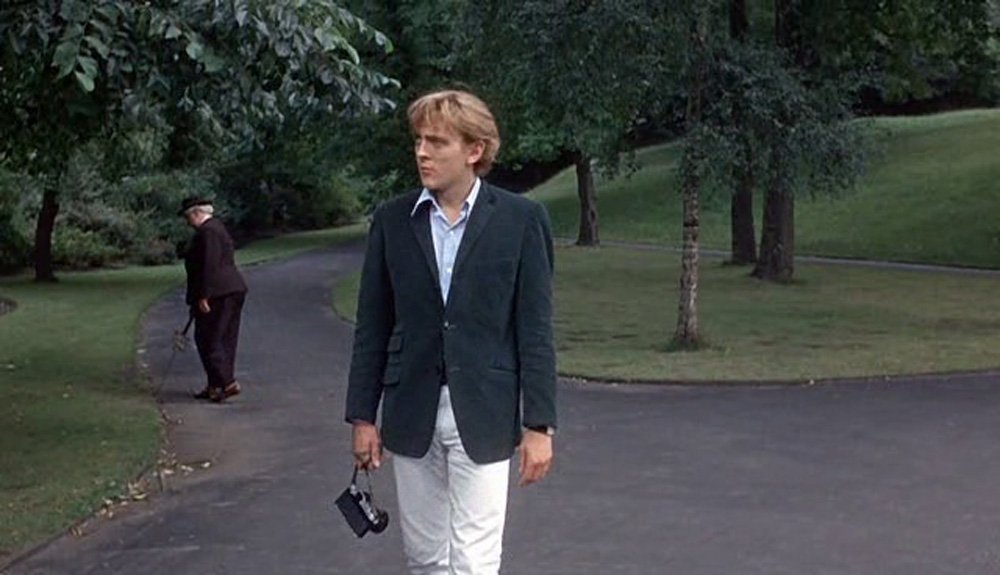 Once the movie is over, I’m not sure where Thomas would go or what he would do. What happens after your view on the world has been totally shattered? Better to just leave him on the grass - he’s finally living in the real world instead a carefully managed construction. It’s a really great movie.