The Great War killed 17 million people, wounded 20 million more, and left psychological trauma on victor and vanquished alike. At the Paris peace conference in 1919, Britain, France, and the United States were tasked to create a new international order that would prevent something like this from ever happening again. Unfortunately, it didn’t work. I read through Zara Steiner’s book on international relationships in the years after the end of World War I to try to understand why a little better. 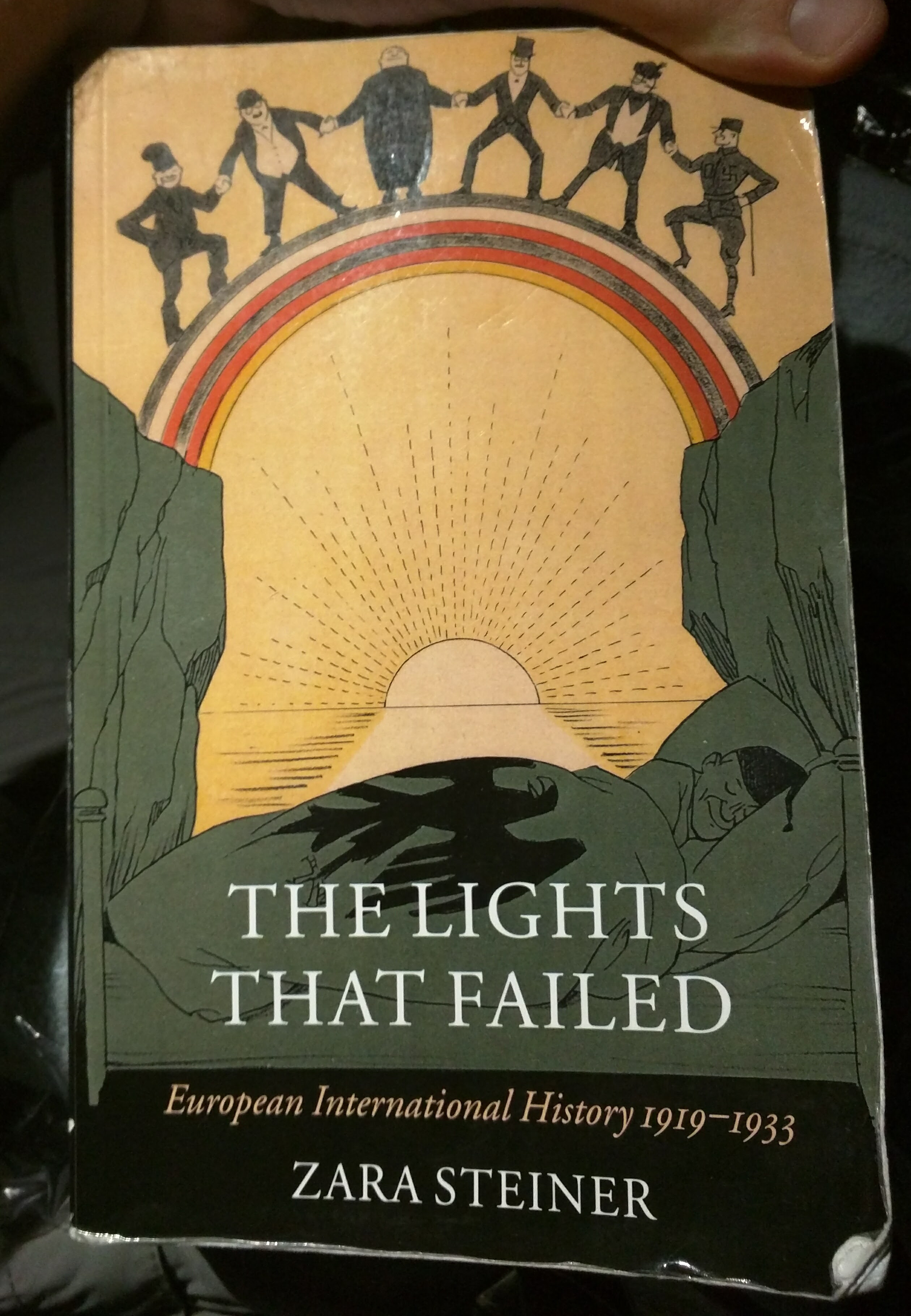 The Treaty of Versailles was an attempt by the victorious powers to prevent another war at the size and scale and create a working international order (similar to order created in 1815 at the Congress of Vienna after Napoleon’s defeat). Though France and Germany were greatly impacted by the war, they would both some day be strong nations again - and when that happened, how could they avoid creating another war?

The Treaty of Versailles has a reputation as a failed document - the victor powers had been united against Germany in the war but had their own ideas for how a post-war order would best work. France wanted Germany to be militarily crippled and so unable to invade again, leading them to want the Rhineland (the area between France and Germany) demilitarized and potentially under eternal international occupation. Britain wanted Germany to be economically reconstructed as soon as possible to recover the economy of Europe. The United States wanted Europe to handle its own affairs and didn’t want to be in a position where it would have to intervene in hundred year old continental squabbles. Over the next fifteen years these basic positions would become calcified, eventually leading to a reconstructed Germany in the hands of the Nazi party. Attempts by France to enforce the treaty, or use it as a jumping off point for disarmament, ran into British resistance as France found themselves again and again without support. It isn’t hard to look at Britain here as the “perfidious Albion” and understand better the culture that produced the appeasement of Nazi Germany in the 1930s.

To prevent another war, France and Britain would have needed a German people who were willing to operate within the treaty limitations, something that didn’t happen due to the timing of the German surrender (the German generals radioed to surrender while they were still inside France). Because of this parts of the German population never felt as if they were defeated, leading to various right-wing agitators to perpetuate the “stabbed in the back” myth. Working as foreign minister, Gustav Stresemann argued for the German position successfully for a number of years (Treaty of Locarno, enterance into the League of Nations), and was willing to operate within the Versailles framework. None of these victories led to an increase in the legitimacy of the Weimar Republic - upon receiving a diplomatic success, right-wing agitators would criticize the government for not getting more, especially around the territorial settlements in the East as it related to Poland and Danzig.

The League of Nations was a first attempt at creating an international body for resolving disputes - however, as the United States and Russia were not members (the US Senate had rejected the treaty of Versailles), the League proved unable to respond to crises on the global landscape. In 1931 the Japanese army conspired to invade and occupy areas of Manchuria, eventually creating a puppet state Manchukuo - while the area was nominally part of China, there was no unified central control from the Chinese government at this time. This incident was allowed to happen because the powers that would restrict it (United States, Russia, or Britain) saw no benefit in intervening. Britain was most impacted but didn’t want to go to war over a little province in China that they had otherwise no substantive interest in. While we know tools like international sanctions to be effective today at forming a response to states who are “bad actors”, at the time it was thought that sanctions were a first step towards war.

I came away from the book feeling that World War 2 was not an inevitable result of the Versailles Treaty. The treaty would need to be revised and a less harsh war reparations regime might have bought the Weimar Republic more of an attempt to build legitimacy. The Great Depression was a result of excessive lending combined with countries locking themselves into the gold standard in an attempt to resist inflating their currency - how the gold standard would behave at this scale on an international level was not well unerstood. The Great Depression encouraged countries to turn inward and in Germany some extremely short-sighted actions from President Hindenberg and members of his cabinet led to them seeking support from Hitler and the Nazis in order to control them. This destabilizing act led to the Nazi military dictatorship, further revisionism of the Versailles treaty, and the horrors of World War 2 and the Holocaust.

It’s hard to not read this book and think “what if” - “what if” Germany had resisted the Nazis, “what if” France had demanded a more politically salable set of war reparations, “what if” Britain had diplomatically backed France at a few crucial times, “what if” economic internationalism from the United States under Herbert Hoover had been more effective. We still operate in a post World War 2 world but part of me wishes we didn’t have to have such horrible historical examples to remind us of the evil that ethnic nationalism can bring.